The idea behind Wayfinders came to me while I was working on a very different game.

That game, which was called "Storylines", was a story generator of sorts in which you could assemble story bits into larger stories using symbols, then read them afterwards and have them be coherent enough. The story system worked pretty well and produced what I thought were enjoyable stories, but I was trying my hardest to create a game around it and couldn't find the right path. It was an auction game for a time, then a rummy-style game, then many other things, and at some point I gave up and settled for something not unlike Ricochet Robot.

An example of a "Storylines" story. When reading it, you would replace all the words in capital blue letters with names found on character and location cards. This one is going to have a few inconsistencies; can you see why just from the symbols?

In the end, "Storylines" never became a marketable idea and is probably never going to get published, and it saddens me because so many hours were spent on creating it that my stomach aches whenever I see the prototype on my shelves.

However, some good at least came out of that experimentation. In one of my tests, I tried laying out the story cards on the table, and players would take turns either placing one of their tokens on a card, or taking back all of their tokens along with the cards under them. The most efficient way to play would be to place all your tokens before taking them back, but you would run the risk of having the cards you wanted stolen. I really liked that mechanism, but it was a bad fit for "Storylines". I decided to put it aside and go back to it later. This was in August 2017.

Cut to May 2018. I had recently stopped working at FoxMind Games, didn't have a job, and was trying to focus on creating games to pitch at Origins. I thought I would try my hand at making a Splendor-style game as I wanted to do a type of game that I would be able to play with my family, so I decided to bring back the mechanism I had tried while working on "Storylines". I modified it slightly to make it a bit more flexible: Players would place workers in front of resource columns instead of on specific resources so that each worker would always bring home a resource — just maybe not the right one.

To bring the mechanism to life, I thought about having players move around a shared tableau of resources-to-points/abilities/resources converters as that seemed A) fair since everyone would have access to the same options, B) a good way to create tension since players could potentially compete for the same targets, and C) a good way to add replayability since the board was modular. I decided to set the game in Polynesia, with players moving around their boats and settling a tableau of islands.

From my first few tests, I could see the core ideas were working and the game had potential. However, there were three issues that took me a bit more time to fix... 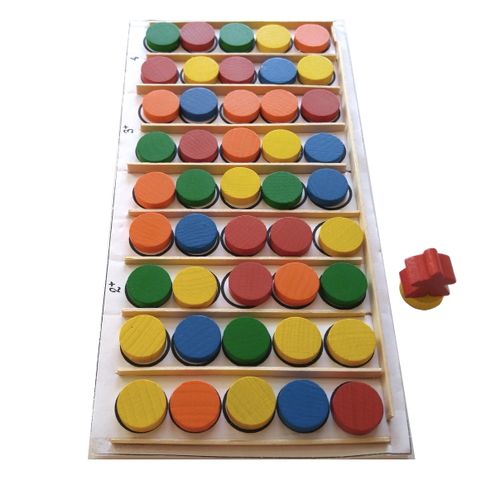 An early version of the resource board. It's been reduced a lot in size since then.

The first issue I encountered was movement. In the first few versions, players were paying for every adjacent movement they made, which made for an extremely slow game. Then, I made it so they could move for free to their own islands, which was better, but it still felt like movement was too constrained. Even more important, it made it hard for players to compete for the same islands beyond the start of the game since the cost of moving to faraway islands was prohibitively high.

The solution to that (or at least the one that felt the best to me) was to make moving to a settled island free, even if it was someone else's island. This freed up movement later in the game and allowed players to always have the possibility to compete for the same islands if they wanted since the cost of moving to X island was almost always the same for everyone. This change also created a nice inflection point and made it so the beginning and the end of the game didn't feel the same.

The second issue was that players didn't feel stressed enough to get the exact resources they needed at the right time because players could accumulate as many resources as they wanted, which meant that everyone was almost always playing all of their workers before taking them back. I initially tried to find an alternative to just setting an inventory limit because it felt too much like the obvious choice. My first idea was to limit players in the use of the resources they accumulated from previous turns so that they would be incentivized to use resources right away if they could, but that proved too complicated for my tastes. After trying a bunch of things, I finally settled on the inventory limit. It remained the most efficient way to achieve my goal, even if it didn't feel the most original.

The third issue was figuring out what would happen if multiple players settled the same island, and whether that should be allowed at all. My first idea was to have decreasing rewards for second, third, and fourth place, but that forced me to put too much information on each island and wasn't super exciting. On the other hand, preventing players from settling the same islands was problematic with four players, and I wanted to avoid having a different ruleset for different player counts, if possible.

That said, I still wanted players to feel like settling an island after an opponent did so was undesirable, so that if someone settled an island they were coveting, it felt like a blow. In the end, I made it so that they would have to give the resources used to settle an island to the first player who settled it. It felt like a nice twist and created a situation in which most times (but not all) it was preferable to change course if someone settled an island before you, which was exactly what I wanted. 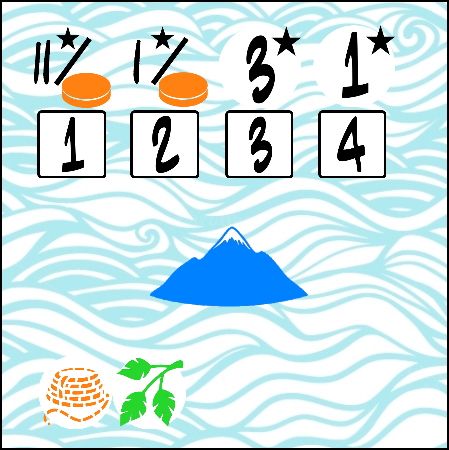 An early version of an island tile, which had too much information

As a side note, one of the things I tried to do with the design of Wayfinders was to contrast a fixed and entirely visible tableau of options with a somewhat uncertain resource-collection mechanism. Since it's technically possible to find the objective best set of islands to settle in a particular game (although that set will differ from game to game), I needed to ensure that uncertainty remained as to whether players would be able to achieve their plans. Somewhere in the decision tree of a game there needs to be an unknown quantity for it to be interesting, and with a fixed tableau the unknown needed to be about the resource collection aspect. Maybe those eight islands are the ones that are going to give you the most points on paper, but maybe the right resources to settle them won't be there, so how are you going to adapt? Or the right resources might be there, but what if other players take them before you?

After about a month of development and testing, I thought my prototype was good enough to show publishers, and I went to Origins with it. I was overjoyed to see that multiple publishers were interested in the game, and it actually was a small problem for me since they were all great publishers and I would have wanted to work with all of them. 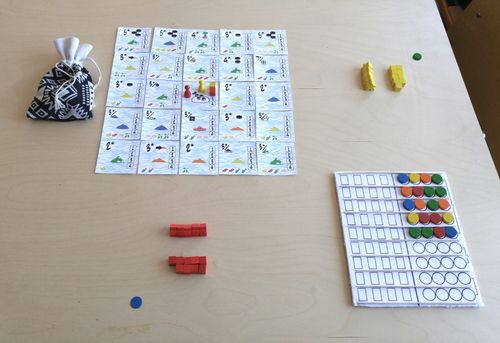 The prototype I brought to Origins

I ended up signing with Pandasaurus Games, and I don't regret a thing. Development with them was great: They had around fifty different groups of testers submitting test results through a Google form, with new results coming in almost daily, which helped make sure everything was the best it could be. It was a learning experience for me as I wasn't used to getting so much feedback at the same time, and I was initially overreacting to a lot of the issues that were coming up. People are going to have contradictory expectations and tastes, and sometimes an issue is just going to be an isolated case.

Also, it's harder to decipher text-only feedback as you cannot have a conversation with the tester, and you cannot watch the person's body language. That being said, I became better at dealing with the Google form feedback as time went on, and it proved to be a powerful tool.

Wayfinders was in intensive testing for about two months, so a relatively short period all considered. Mostly little things were tweaked — numbers and such. The biggest change was probably reducing the size of the resource board, which proved to be controversial with some of the playtesters, but in my opinion a significant change for the better as it increased player interaction as well as tension around resource collection. After testing was done, things moved quickly, with most of the artwork finished by the end of May or so. 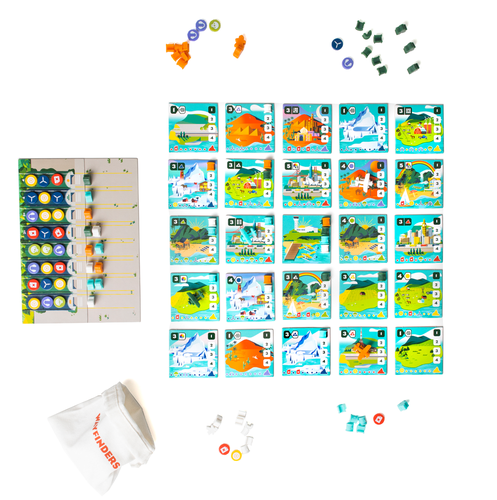 What the game looks like now after the amazing work done by Pandasaurus and Michael Parla. Wow!

The game is finally coming out at SPIEL '19 this October. It's a game that I've had a lot of fun creating, and I hope people will have as much fun playing it!