When I make games, I typically start from a feeling or big moment I want people to experience: What kind of emotional reactions do I want during play, and what do I want them to be thinking about afterward?

For a long time, I've been fascinated by how people could be faced with the same thing and have vastly different opinions and views on it, both small things, like which TV show is the best of all time (Arrested Development, Seasons 1-3 — we don't speak of the others), but also big things like politics, God, or which humans we should treat like humans.

There have been so many ways to help understand this, from giant philosophy arguments to the comic of two people arguing over whether the number is a 9 or a 6, so when faced with the issue of depth of human communication and diversity of thought, the only logical choice to me was to make a 15-minute co-op game using foam blocks.

Because I'm a game designer, so I work with what I know. 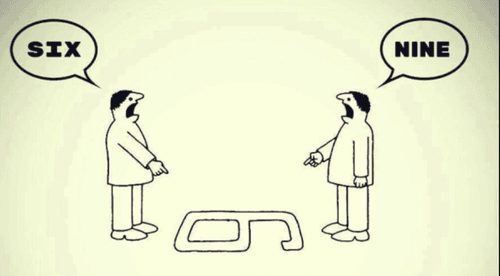 The reason you need lines under numbers

In Mental Blocks, you're working as a team to build a single 3D structure in the center of the table under a time limit. Each player has only one perspective on the final solution, and each has restrictions about what they can do — and all the while one player MIGHT actually be working in bad faith against the team, trying to get them to lose. 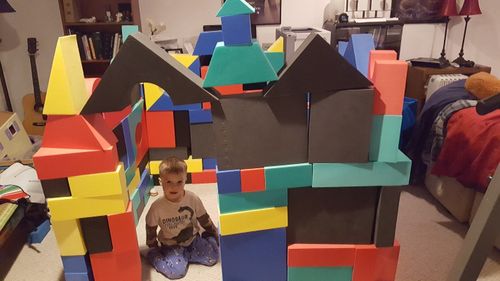 Piles of blocks left over from previous client's game project

The original version of this design (affectionately known as "The Giant Block Game") was more of an experience than a game as it was fully co-op with only a single puzzle. As a fun bonus, it used giant foot-long foam blocks (leftover material from a work project) that I cut into shapes with a bread knife.

It was fun and got people talking about their perspectives and how to better understand one another. I loved the idea that while everyone's view could be correct, no one's view was complete; I loved how there was a right answer, but that it was impossible to figure it out without listening to others, learning about what they thought, then working together. I considered "The Giant Block Game" a success — then life got busy and I put it in my pile of "neat things I should work on more someday".

Sometime later, I got a call from a friend at work needing me to come in the next morning and brainstorm a game for a client of ours. During the meeting, it was clear that something like "The Giant Block Game" could actually help them figure out some things, so with permission from work, I decided to pitch it to the client as an option for the project. They LOVED it! Well, parts of it. To make it work for them, I pulled out the restrictions on actions, simplified the perspectives, and made it a little less "gamey".

Meanwhile, I was also weekly-ish attending a local game designer meet-up called the Northwest Ohio Game Designers who have been kind enough to play many of my work games. We played "The Giant Block Game" (Work Edition), and they all really got into it and were excited about what it could be for a hobby game. After the game, one of the designers — and I'm pretty sure it was Jonathan Gilmour — mentioned, "Whoa, what if you added a betrayer to this?" and suddenly things started clicking in my head. And since he is awesome, we decided to start working on the design together. 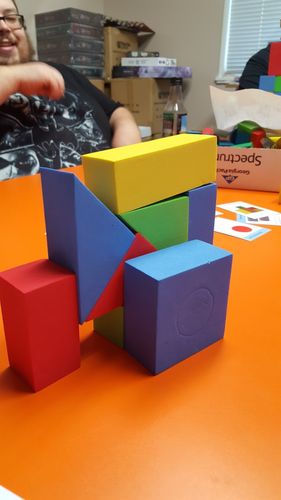 Early playtest, including a cut-in-half Jonathan

Adding "The Betrayer" took a very fun co-op game and added an entire new element to it. It became this crazy real-time social deduction game in which you watched everyone and tried to figure out who might be sabotaging the team. At that point, internally, we started calling it "Foam of Winter", but that name didn't stick for obvious reasons. 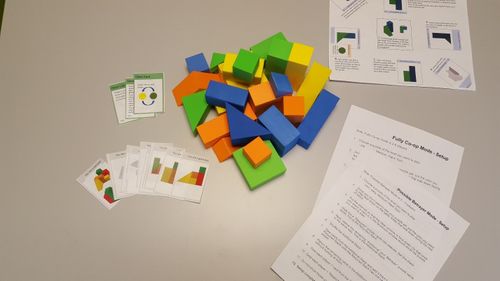 The game first really felt like a success when I took it to a local con to get early feedback. I talked to the con organizers and got permission to set up on an open table, but after an hour or so, no one had stopped by yet...which was less than encouraging. I figured I'd hang out for another hour or two, then take off for the weekend. Bored, I decided to pile the blocks as high as I could and post a sign on the top: "1 minute to learn, 10 minutes to play". About five minutes later, I had my first group ask to try it. About fifty minutes and five games after that, I had to ask them to stop playing...because there was a line.

Apparently, there is something very attractive about a group of nine people frantically trying to build with blocks while yelling at each other and accusing one and all of being the betrayer. It was freaking hilarious to watch.

I called my wife and pulled her in to help manage it all, get puzzles ready for the next group, run games, etc. It was amazing and validating. 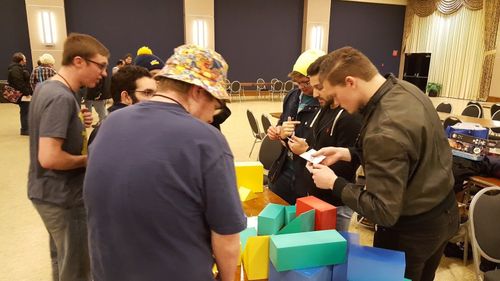 One of the first BashCon groups to try the game

Around the time of BashCon, Jonathan showed the design to Pandasaurus Games, which decided that "The Giant Block Game" was maybe not the most marketable name. They pitched the name "Mental Blocks", which I must agree is a significantly better name in every conceivable way.

Moving into official build mode, our first goal was around forty puzzles, which was a decent amount. All our playtests had shown that groups can play the same puzzles multiple times without even realizing it due to how the information is split up. Unfortunately, we heard from manufactures that if we went over thirty puzzles (which would be 270 cards!), then our costs for the game were not viable. 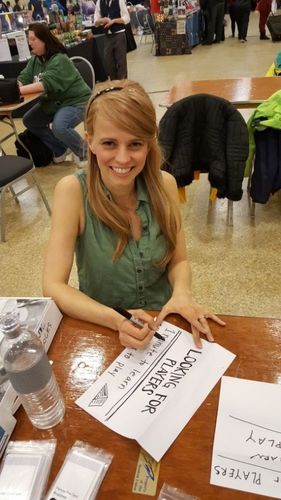 My wife, remaking my badly handwritten original sign at BashCon

Ultimately, we realized that most of our print-and-play testers were printing only single-sided cards and that approach worked great for them, so we decided to get rid of the back art and create double-sided puzzle cards, placing the easy level on one side and the challenge level on the other, which let us jump the number of puzzles up to a solid sixty.

Once we had the puzzles down, we moved into mass playtesting. Jonathan and Pandasaurus have a great network of vetted playtesters that allowed us to send tons of copies and get real-time feedback through forms and a private Reddit. We had the game in mass playtesting for four months, intentionally at the end of the year so that players would take the game to Thanksgiving, Christmas, and New Year's to try it with their non-gaming friends and family, in addition to their regular gaming groups. We asked for fifteen plays per group and had multiple groups that went way over that. One group reported 104 plays!

To help with the groups that were getting pretty skilled at the game, we introduced difficulty levels and the optional "Glitch" cards, which change how the game plays and add crazy table restrictions, e.g., "No one can talk; use only hand gestures," or "Two people must be touching each block to move it."

Some of the most rewarding feedback came through these forms, quotes like, "My family all had a good time. They didn't complain about me trying to get them to play one of those 'board games' I have. They all loved it, which was great for people that almost never play games." Or "This was my best gaming experience of the year." Or "It's so great to have a co-op game where we can work as a team, but it's impossible to have one person quarterback it all, so we can all play." Or "I tried this with several groups from heavy gamers and RPGers to family and friends who don't play games. Everyone enjoyed it and it is [a] super simple teach." All these quotes were really great to hear.

The feedback also told us where we messed up, where the rules were not clear, which puzzles could be broken, and where we had bad ideas. At one point, we had a "Win / Lose" tracker that added a legacy-style feel, the idea being that as you won, the game would get harder, and as you lost, the game would self-correct and get easier. In practice, it made "The Betrayer" feel like an outcast and worked against the quick pick-up-and-play nature of the game, so we ditched it. 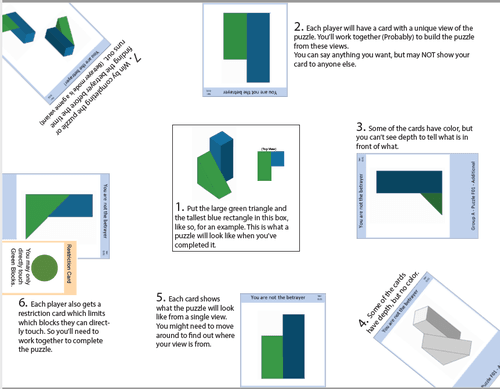 The first version of the quick-play mat

To make rules as fast and clear as possible, I made a quick start sheet. Basically, you set out a puzzle on a sheet and that one image teaches the whole game.

The best thing we saw was that with the two modes — fully co-operative and potential betrayer — the game could fit with all types of players. Since the game took only a minute or two to teach, that meant pretty much any group was willing to try it, and then once they tried it, they wanted more. The groups that wanted a more causal party-style game could play fully co-op, while the groups that wanted to be more intense could up the challenge level or add the potential traitor. It was becoming the rare game that could introduce new people to modern board games, but still be fun for more experienced gamers.

Mental Blocks came a long way from a personal "art game" to something that hundreds of playtesters have played and loved — but when I think about my original goal, this feedback quote is my favorite of all: "[She] loved seeing her family work together and listen ([Which is] good for things outside of gaming). It also gives perspective that we all see things differently, and we could all be correct (she sorta got teary-eyed at this point) — Thanksgiving, gotta love emotional holiday time!"

Which means hey, it can be fun AND still make a point!

I'm excited to see Mental Blocks come out at Gen Con 2019 in August, so stop by the Pandasaurus Games booth (#1441) to try it. After all, it takes only a minute to learn and ten to play!